Horchata, what is it? 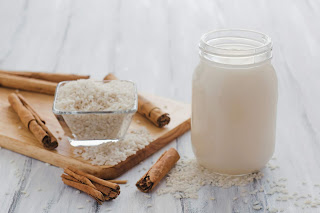 Horchata, which comes from the Latin term hordeata, which in turn comes from hordeum (barley), is a term related to a Mediterranean tradition of grain-based beverages and also the linguistic root of orgeat syrup.

It originated in North Africa. It is estimated that during the 11th century it began to spread throughout Hispania (now Spain and Portugal). There are 13th-century records of a horchata-like beverage made near Valencia.

From Valencia, where it remained popular, the concept of horchata was brought to the New World. Here, drinks called agua de horchata or simply horchata came to be made with white rice and cinnamon or canella instead of tiger nuts. Sometimes these drinks had vanilla added, or were served adorned with fruit.

Today, these and other similarly flavored plant based beverages are sold in various parts of the world as varieties of horchata or kunnu.

Posted by Favela's Mexican Grill at 5:30 AM