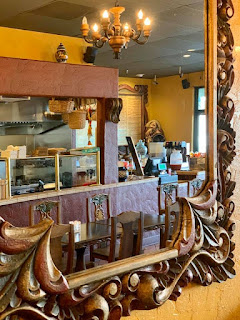 A public eating establishment similar to a restaurant is mentioned in a 512 BC record from Ancient Egypt. The establishment served only one dish, a plate of cereal, wild fowl, and onions.

A forerunner of the modern restaurant is the thermopolium, an establishment in Ancient Greece and Ancient Rome that sold and served ready-to-eat food and beverages. These establishments were somewhat comparable to modern fast food restaurants. They were most often frequented by people who lacked private kitchens. In the Roman Empire they were popular among residents of insulae.

In Pompeii, 158 thermopolia with service counters have been identified throughout the town. They were concentrated along the main axis of the town and the public spaces where they were frequented by the locals.

The Romans also had the popina, a wine bar which in addition to a variety of wines offered a limited selection of simple foods such as olives, bread, cheese, stews, sausage, and porridge. The popinae were known as places for the plebeians of the lower classes of Roman society to socialize. While some were confined to one standing room only, others had tables and stools and a few even had couches.

Another early forerunner of the restaurant was the inn. Throughout the ancient world, inns were set up alongside roads to cater to people traveling between cities, offering lodging and food. Meals were typically served at a common table to guests. However, there were no menus or options to choose from.

The Arthashastra references establishments where prepared food was sold in ancient India. One regulation states that "those who trade in cooked rice, liquor, and flesh" are to live in the south of the city. Another states that superintendents of storehouses may give surpluses of bran and flour to "those who prepare cooked rice, and rice-cakes", while a regulation involving city superintendents references "sellers of cooked flesh and cooked rice."

Early eating establishments recognizable as restaurants in the modern sense emerged in Song dynasty China during the 11th and 12th centuries. In large cities, such as Kaifeng and Hangzhou, food catering establishments catered to merchants who travelled between cities. Probably growing out of tea houses and taverns which catered to travellers, Kaifeng's restaurants blossomed into an industry that catered to locals as well as people from other regions of China. As travelling merchants were not used to local cuisine of other cities, these establishments were set up to serve dishes familiar to merchants from other parts of China. Such establishments were located in the entertainment districts of major cities, alongside hotels, bars, and brothels. The larger and more opulent of these establishments offered a dining experience that was similar to modern restaurant culture. According to a Chinese manuscript from 1126, patrons of one such establishment were greeted with a selection of pre-plated demonstration dishes which represented food options. Customers had their orders taken by a team of waiters who would then sing their orders to the kitchen and distribute the dishes in the exact order in which they had been ordered.

There is a direct correlation between the growth of the restaurant businesses and institutions of theatrical stage drama, gambling and prostitution which served the burgeoning merchant middle class during the Song dynasty. Restaurants catered to different styles of cuisine, price brackets, and religious requirements. Even within a single restaurant choices were available, and people ordered the entrée from written menus. An account from 1275 writes of Hangzhou, the capital city for the last half of the dynasty:

The people of Hangzhou are very difficult to please. Hundreds of orders are given on all sides: this person wants something hot, another something cold, a third something tepid, a fourth something chilled. one wants cooked food, another raw, another chooses roast, another grill.

The restaurants in Hangzhou also catered to many northern Chinese who had fled south from Kaifeng during the Jurchen invasion of the 1120s, while it is also known that many restaurants were run by families formerly from Kaifeng.

In Japan, a restaurant culture emerged in the 16th century out of local tea houses. Tea house owner Sen no Rikyū created the kaiseki multi-course meal tradition, and his grandsons expanded the tradition to include speciality dishes and cutlery which matched the aesthetic of the food.

In Europe, inns which offered food and lodgings and taverns where food was served alongside alcoholic beverages continued to be the main places to buy a prepared meal into the Middle Ages and Renaissance. They typically served common fare of the type normally available to peasants. In Spain, such establishments were called bodegas and served tapas. In England, they typically served foods such as sausage and shepherd's pie.

France in particular has a rich history with the development of various forms of inns and eateries, eventually to form many of the now-ubiquitous elements of the modern restaurant. As far back as the thirteenth century, French inns served a variety of food — bread, cheese, bacon, roasts, soups, and stews - usually eaten at a common table. Parisians could buy what was essentially take-out food from rôtisseurs, who prepared roasted meat dishes, and pastry-cooks, who could prepare meat pies and often more elaborate dishes. Municipal statutes stated that the official prices per item were to be posted at the entrance; this was the first official mention of menus.

Taverns also served food, as did cabarets. A cabaret, however, unlike a tavern, served food at tables with tablecloths, provided drinks with the meal, and charged by the customers' choice of dish, rather than by the pot. Cabarets were reputed to serve better food than taverns and a few, such as the Petit Maure, became well known. A few cabarets had musicians or singing, but most, until the late 19th century, were simply convivial eating places. The first café opened in Paris in 1672 at the Saint-Germain fair. By 1723 there were nearly four hundred cafés in Paris, but their menu was limited to simpler dishes or confectionaries, such as coffee, tea, chocolate (the drink; chocolate in solid state was invented only in the 19th century), ice creams, pastries, and liqueurs.

At the end of the 16th century, the guild of cook-caterers (later known as "traiteurs") was given its own legal status. The traiteurs dominated sophisticated food service, delivering or preparing meals for the wealthy at their residences. Taverns and cabarets were limited to serving little more than roast or grilled meats. Towards the end of the seventeenth century, both inns and then traiteurs began to offer "host's tables" (tables d'hôte), where one paid a set price to sit at a large table with other guests and eat a fixed menu meal.

Visit our website to see more about our menu and locations.

Posted by Favela's Mexican Grill at 6:30 AM