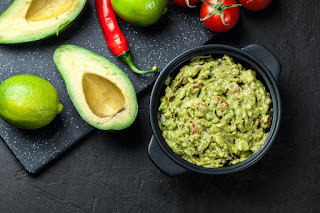 Avocados seeds were first found in the Tehuacan Valley of Mexico around 9,000 - 10,000 years ago (7000 - 8000 BCE) and have been domesticated by various Mezoamerican groups by 5000 BCE. They were likely cultivated in the Supe Valley in Peru as early as 3100 BCE. In the early 1900s, avocados frequently went by the name alligator pear. In the 1697 book, A New Voyage Round the World, the first known description of a guacamole recipe (though not known by that name) was by English privateer and naturalist William Dampier, who in his visit to Central America during one of his circumnavigations, noted a native preparation made of grinding together avocados, sugar, and lime juice.

Guacamole has increased avocado sales in the U.S., especially on Super Bowl Sunday and Cinco de Mayo. The rising consumption of guacamole is most likely due to the U.S. government lifting a ban on avocado imports in the 1990s and the growth of the U.S. Latino population.

Guacamole is traditionally made by mashing peeled, ripe avocados and salt with a molcajete y tejolote (mortar and pestle). Recipes often call for lime juice, cilantro, onions, and jalapeños. Some non-traditional recipes may call for sour cream, tomatoes, basil, or peas.

Due to the presence of polyphenol oxidase in the cells of avocado, exposure to oxygen in the air causes an enzymatic reaction and develops melanoidin pigment, turning the sauce brown. This result is generally considered unappetizing, and there are several methods (some anecdotal) that are used to counter this effect, such as storing the guacamole in an air-tight container or wrapping tightly in plastic to limit the surface area exposed to the air.

Visit our website to see more about our menu and locations.

Posted by Favela's Mexican Grill at 6:00 AM