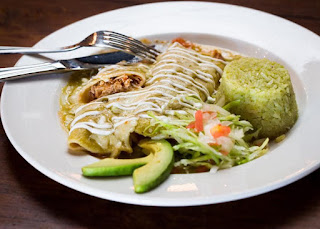 Mexican cuisine is a complex and ancient cuisine, with techniques and skills developed over thousands of years of history. It is created mostly with ingredients native to Mexico, as well as those brought over by the Spanish conquistadors, with some new influences since then. Mexican cuisine has been influenced by its proximity to the US-Mexican border. For example, burritos were thought to have been invented for easier transportation of beans by wrapping them in tortillas for field labor. Modifications like these brought Mexican cuisine to the United States, where states like Arizona further adapted burritos by deep frying them, creating the modern chimichanga.

In addition to staples, such as corn and chile peppers, native ingredients include tomatoes, squashes, avocados, cocoa and vanilla, as well as ingredients not generally used in other cuisines, such as edible flowers, vegetables like huauzontle and papaloquelite, or small criollo avocados, whose skin is edible. Chocolate originated in Mexico and was prized by the Aztecs. It remains an important ingredient in Mexican cookery.

European contributions include pork, chicken, beef, cheese, herbs and spices, as well as some fruits.

Tropical fruits, many of which are indigenous to Mexico and the Americas, such as guava, prickly pear, sapote, mangoes, bananas, pineapple and cherimoya (custard apple) are popular, especially in the center and south of the country.

Edible insects have been enjoyed in Mexico for millennia. Entemophagy or insect-eating is becoming increasingly popular outside of poor and rural areas for its unique flavors, sustainability, and connection to pre-Hispanic heritage. Popular species include chapulines (grasshoppers or crickets), escamoles (ant larvae), cumiles (stink bugs) and ahuatle (water bug eggs).