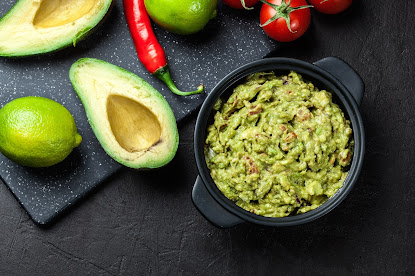 Guacamole (Spanish: [(ɡ)wakaˈmole] (listen); (informally shortened to guac in the United States since the 1980s) is an avocado-based dip, spread, or salad first developed in Mexico. In addition to its use in modern Mexican cuisine, it has become part of international cuisine as a dip, condiment and salad ingredient.

Guacamole is traditionally made by mashing peeled, ripe avocados and salt with a molcajete y tejolote (mortar and pestle). Recipes often call for lime juice, cilantro, onions, and jalapeños. Some non-traditional recipes may call for sour cream, tomatoes, basil, or peas.

Due to the presence of polyphenol oxidase in the cells of avocado, exposure to oxygen in the air causes an enzymatic reaction and develops melanoidin pigment, turning the sauce brown. This result is generally considered unappetizing, and there are several methods (some anecdotal) that are used to counter this effect, such as storing the guacamole in an air-tight container or wrapping tightly in plastic to limit the surface area exposed to the air.