What Do You Know About a Burrito? 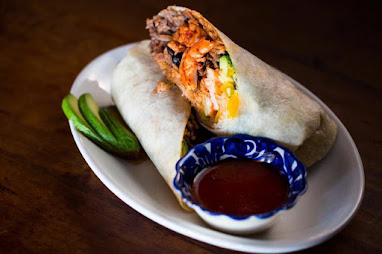 A burrito (English: /bəˈriːtoʊ/, Spanish: [buˈrito] (listen)) is a dish in Mexican and Tex-Mex cuisine that took form in Ciudad Juárez, consisting of a flour tortilla wrapped into a sealed cylindrical shape around various ingredients. The tortilla is sometimes lightly grilled or steamed to soften it, make it more pliable, and allow it to adhere to itself. Burritos are often eaten by hand, as their tight wrapping keeps the ingredients together. Burritos can also be served "wet", i.e., covered in a savory and spicy sauce, when they would be eaten with a fork and knife.

Burritos are filled with savory ingredients, most often a meat such as beef, chicken, or pork, and often include other ingredients, such as rice, cooked beans (either whole or refried), vegetables, such as lettuce and tomatoes, cheese, and condiments such as salsa, pico de gallo, guacamole, or crema.

Burritos are often contrasted with similar dishes, such as tacos, in which a small hand-sized tortilla is folded in half around the ingredients rather than wrapped and sealed, or with enchiladas, which use corn masa tortillas, and are covered in a savory sauce, to be eaten with a fork and knife.