Where Did Enchiladas Start? 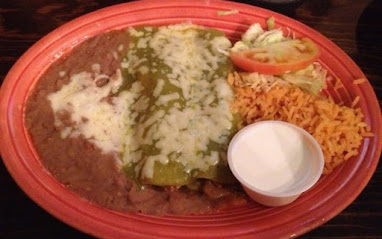 Enchiladas originated in Mexico, where the practice of rolling tortillas around other food dates back at least to Aztec times. The people living in the lake region of the Valley of Mexico traditionally ate corn tortillas folded or rolled around small fish. Writing at the time of the Spanish conquistadors, Bernal Díaz del Castillo documented a feast enjoyed by Europeans hosted by Hernán Cortés in Coyoacán, which included foods served in corn tortillas. (Note that the native Nahuatl name for the flat corn bread used was tlaxcalli; the Spanish gave it the name tortilla.) The Nahuatl word for enchilada is chīllapītzalli [t͡ʃiːlːapiːˈt͡salːi], which is formed of the Nahuatl word for "chili", chīlli [ˈt͡ʃiːlːi] and the Nahuatl word for "flute", tlapītzalli.  In the 19th century, as Mexican cuisine was being memorialized, enchiladas were mentioned in the first Mexican cookbook, El cocinero mexicano ("The Mexican Chef"), published in 1831, and in Mariano Galvan Rivera's Diccionario de Cocina, published in 1845.

Mexican cooking authority Diana Kennedy cites an early reference from an American traveler from 1883 who remarked, "Enchiladas, a greasy tortilla sandwich containing chiles and a number of other uninviting looking compounds and other nasty messes, are sold everywhere, filling the air with a pungent, nauseous smell." Kennedy goes on to heartily disagree with that characterization, likely brought on by culture shock. Another early English-language mention is found in the California Mexican-Spanish Cookbook (1914) by Bertha Haffner Ginger.